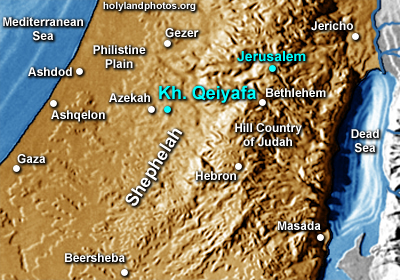 Khirbet Qeiyafa is a site located in the Shephelah, about 1 mi. east of Azekah and about 14 mi. northwest of Hebron.  It overlooks the Elah valley from the north.  The site has been excavated by Yosef Garfinkel and Saar Ganor 2007-2009.

It is an early Iron II site, that they say dates to the first half of the tenth century B.C. — the days of the biblical character David.

The site has been much in the news recently for here in the Valley of Elah David fought Goliath (1 Samuel 17) and because of the massive city wall and gate and ostracon that was found here.

For the official excavation web site for Kh. Qeiyafa and an article describing the finds there Click Here.

For a pdf version of a powerpoint presentation of the finds by the excavator Click Here.