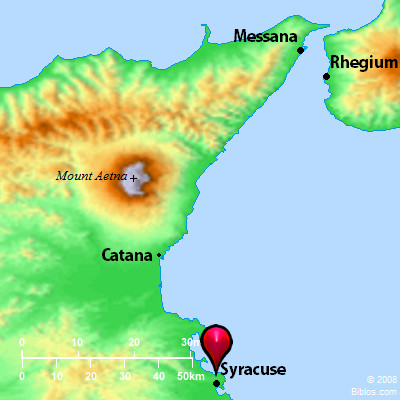 Syracuse was a Greek and Roman city on the southern portion of the east coast of Sicily.  Paul spent three days there when the ship that carried him from Malta to Puteoli docked there for three days (Acts 28:12).  This probably happened in the spring of A.D. 60.

It was founded in 734 B.C. and reached its zenith in the sixth and fifth centuries B.C.  The Athenians laid siege to it (415–413 B.C.) but were seriously defeated and this defeat helped lead to the decline of the Golden Age of Athens.  Syracuse, along with the whole of Sicily, was fought over by the Romans and the Carthaginians.

In 212 B.C. Rome conquered the city.  It carried off many Greek captives and many pieces of Greek artwork to Rome.  This influx led to the Romans turning their cultural "tastes" towards things Greek.  Unfortunately, the great mathematician and inventor, Archimedes, was killed by a Roman soldier, in spite of the order that he was to be spared.

Archaeological remains of the Roman city include an altar, theater, an amphitheater, etc.