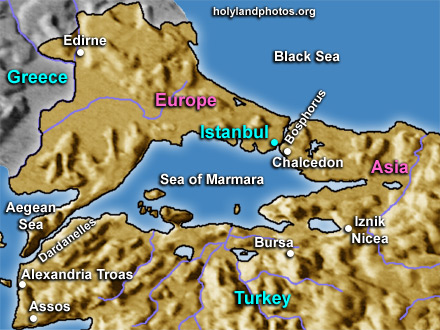 Istanbul is a Turkish city of 7,000,000 people (13,000,000 total with suburbs).  It is located on the European side of the Bosphorus Straits although it has suburbs on the Asian side—boats and bridges transport people and goods east and west.

The Roman Emperor Constantine the Great moved his capital to this city in 324/330, and it soon became known as Constantinopolis (“the city of Constantine” = Constantinople).  The city was strongly fortified, but fell to the Crusaders for a period of time, and eventually to the Ottoman Turks on May 29, 1453.

It became the capital of the Ottoman Turks and the great ruler Suleiman the Magnificent (1520–1566) built the Topkapi palace from which the Ottomans ruled the far-flung reaches of their empire.  Its name was changed to “Istanbul.”

Although not the capital of modern Turkey—Ankara is—Istanbul is Turkey’s largest city.

The Marmara Region is that area in northwestern Turkey surrounding the Sea of Marmara.  From the north—the Black Sea—the Sea of Marmara is entered via the 20 mi. [32 km.] long Bosphorus Straits.  It is exited to the southwest via the 42 mi. [68 km.] long Dardanelles (ancient Hellespont) into the Aegean Sea.  These bodies of water, the Bosphorus, the Sea of Marmara, and the Dardanelles separate Asia from Europe.  In addition, they provide passage from the Mediterranean and the Aegean Seas into the land locked Black Sea.  Thus they have always been of strategic importance!