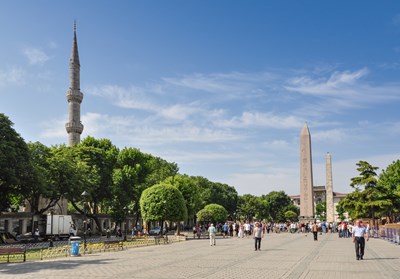 The Hippodrome was first constructed around A.D. 200 by the Roman Emperor Septimius Severus as part of his rebuilding of the city of Byzantium.  Constantine the Great and his successors later expanded it.

Today a park covers most of the hippodrome and it still reflects is elongated shape.  Here chariot races and other extravaganzas were held: including victory parades and coronations.  Here also the Nike riot of 532 began, and it was here that some 30,000 partisans were slaughtered.