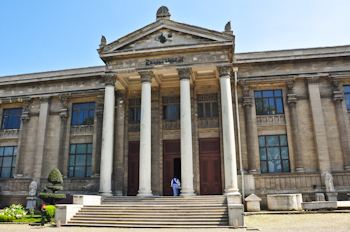 View of the entrance to the "world-class" Archaeological Museum in Istanbul.  Much of the rich collection contained in the museum was collected from all over the Ottoman Empire during the 19th and early 20th centuries.  Since that time many additions have been made from more recent archaeological excavations in Turkey.