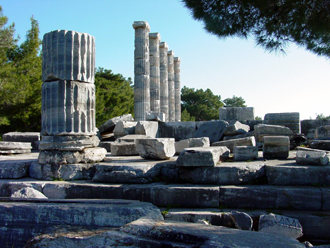 There were a number of temples at Priene, including temples to Athena, Asclepius, Demeter, and the Egyptian gods (among others).  The most prominently preserved and restored is the Temple of Athena.

Alexander the Great, about 333 B.C., ordered the construction of the Athena Temple.  It was designed by the architect Pythius, famous for his design of the Halicarnassus Mausoleum – one of the seven wonders of the ancient world.  This Temple of Athena contained a smaller, 23 ft. [ 7 m.] high, version of the statue of Athena that was in the Parthenon in Athens.  The standing columns of this temple are the “icon” of the site of Priene.

For a visit to the very interesting site of Priene Click Here.