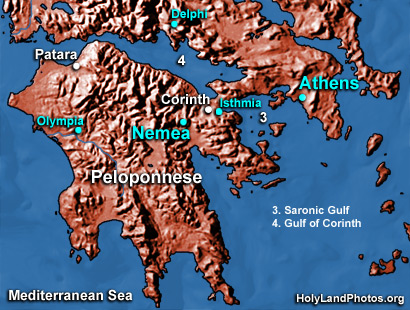 Nemea was located about 11.6 mi. [18.6 km.] southwest of Corinth.  One of the four Panhellenic festivals was held every two years in the stadium of Nemea.  The other locations of these festivals were Delphi, Isthmia, and Olympia.

Nemea is well known in Greek mythology as the site of the first of the twelve labors of Heracles (Herakles).  Heracles was the son of the god Zeus and a mortal Alcmene.  Although originally a mortal, he eventually attained divine status and was widely worshiped throughout Greece.  As punishment for killing six of his children he had to perform 12 “labors” (= very difficult tasks).  The first of which was to kill the Nemean Lion.  He wrestled with the lion, strangled it, and subsequently used its pelt as a cloak.

For a view of an image of Heracles with the pelt of the Nemean Lion found at Pergamum (Turkey) Click Here.