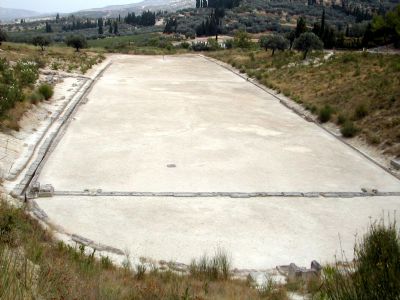 Nemea was located about 11.6 mi. [18.6 km.] southwest of Corinth.  Here, one of the four Panhellenic festivals was held every two years - during July or August.  The other locations of these festivals were Delphi, Isthmia, and Olympia.    The well–preserved stadium was built in the late fourth century B.C. and could hold about 40,000 spectators.  Contests were held in the nude and women were forbidden to enter the stadium.  The games were held in this stadium until 271 B.C. when the games were moved to other cities in the vicinity.

Athletic contests included foot races, boxing, wrestling, the pankration (a free fight in which only biting and gouging were forbidden), and the pentathlon (sprint, javelin, discus, long jump, and wrestling).  The winners of the various events received a wreath composed of celery leaves.