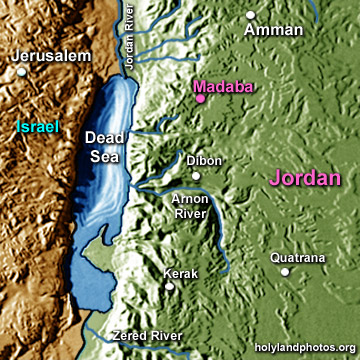 It was a Moabite town that was captured from Sihon the Amorite as the Israelites moved towards the Land of Canaan under the leadership of Moses (Num 21:30).  It was allotted to the tribe of Reuben (Josh 13:9, 16).

In the 1880’s Christians from el–Kerak settled here and were permitted to build churches—but only in locations where there previously had been churches.  In 1884 when clearing the debris from an old Byzantine Church the famous Mosaic known as the Madaba Map was discovered.

Madaba is rightfully famous for the beautiful Byzantine mosaics that have been found here and in the surrounding area.  This section will feature some of the mosaics found at, or near, Madaba—especially the famous sixth century Madaba Map that is located in St. George's Church.