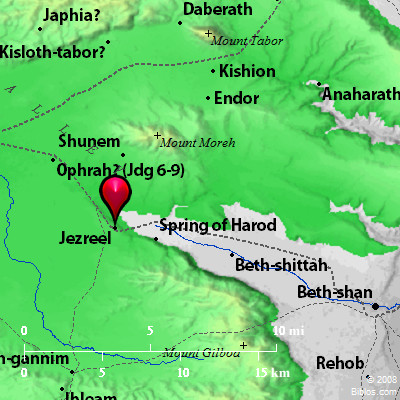 Jezreel is mentioned numerous times in the Hebrew Bible.  It was assigned to the tribe of Issachar (Josh 19:17-18) and it was at its spring that Saul mustered his troops before battling the Philistines (1 Sam 29:1).  Apparently the northern kings had a royal residence there for Ahab fled there after Elijah's confrontation with the prophets of Baal and Asherah on Mount Carmel (1 Kings 18:45-46) and it was there that Ahab coveted Naboth's vineyard that was beside his palace (1 Kgs 21:1 and all of chapter 21).  There, Joram and Jezebel were killed and the southern king Ahaziah was wounded (eventually dying of his wounds).