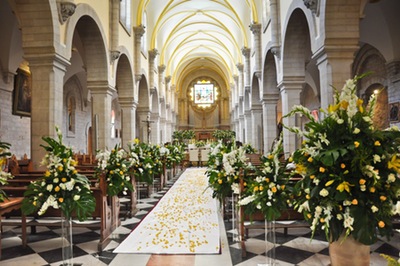 The church of Saint Catherine was built in 1881 to replace an older Crusader Church that had been built over an even older Byzantine monastery.

St. Catherine of Alexandria Egypt was a female martyr.  Her connection with Bethlehem is not known, but she may have been honored here by Saint Paula—the benefactor of St. Jerome.  Saint Paula may have named the Byzantine monastery in honor of this other pious lady—both being examples of pious living and being faithful to death.

Holy Catherine the Great Martyr is, according to tradition, a Christian saint and virgin, who was martyred in the early 4th century at the hands of the pagan emperor Maxentius. According to her hagiography, she was both a princess and a noted scholar, who became a Christian around the age of fourteen, converted hundreds of people to Christianity, and was martyred around the age of 18. More than 1,100 years following her martyrdom, Saint Joan of Arc identified Catherine as one of the Saints who appeared to her and counselled her.  (Wikipedia)