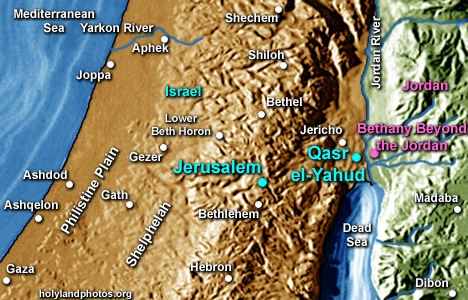 Qasr el-Yahud ("Castle of the Jews") is located on the Israeli side of the Jordan River, 5.6 mi. (9 km.) east of Jericho and 4.5 mi. (7 km.) north of the Dead Sea directly opposite the Jordanian "Bethany Beyond the Jordan."

This site, and its Jordanian counterpart, are associated with the Israelites crossing the Jordan River (Joshua 2), the boundary between Canaan and Gilead (Joshua 22), Elijah being taken up into heaven, and especially John baptizing (Matt 3:1-17; Mark 1:2-11; Luke 3:1-22; and John 1:6-34).   John 1:28 in the KJV reads "Betharaba beyond Jordan" while the NIV more correctly reads "Bethany on the other side of the Jordan."

Since the Byzantine period there have been monasteries located on both the Israeli and Jordanian sides of the river—but the western side was more easily accessible to Christian pilgrims coming from Jerusalem and Jericho.

The Israelis have recently upgraded the site on the west side of the Jordan and have opened it to the public in general.  The site is now managed by the Israel Nature and Parks Authority.  Click Here for hours and access.