Dome of the Rock & Central 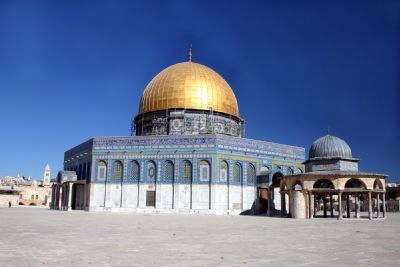 The Dome of the Rock was completed about A.D. 691 by the Moslem Umayyad Dynasty which was headquartered in Damascus. It was intended to portray the glories of Islam and to divert pilgrim traffic to Jerusalem - from Mecca and Medina.

"The current exterior of the dome is made up of 1200 trapezoidal shaped brass sheets, which were first plated with a thin layer of copper and then a layer of nickel. An anode covered with felt and impregnated with a liquefied gold solution was then passed over the sheets depositing a thickness of 2.3 microns of gold. A total of 80 kilograms of gold, costing then $1.5 million were used. The work was financed by the late King Hussein, who donated $8.25 million, raised by selling off property he owned in the UK."