In the center of the image is a doorway.  This is Tunnel IV which leads to the famous "Hezekiah's Tunnel."  This may have been the original starting point for Hezekiah's Tunnel!  To the right of the doorway is a carved frame that has a recently deciphered inscription!!

On the right side of the image, is a large "gash."  This is where Tunnel III entered the pool, bringing water from the Gihon Spring.  Or more precisely, Channel II led to Tunnel III, and that in turn led to the "Round Chamber" (aka "The Pool") of the "Rock-cut Pool." 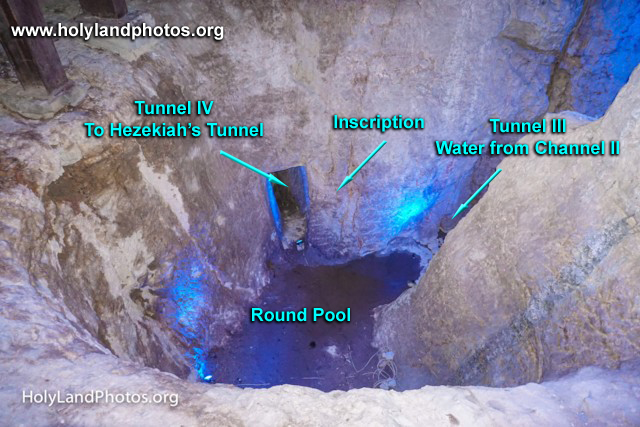 For a popular presentation of their finds see Reich, Ronny, and Shukron, Eli.  "Light at the End of the Tunnel:  Warren's Shaft Theory of David's Conquests Shattered."  Biblical Archaeology Review, vol. 25, no. 1 (January/February, 1999):22–33, 72.

And for recent interpretations see: