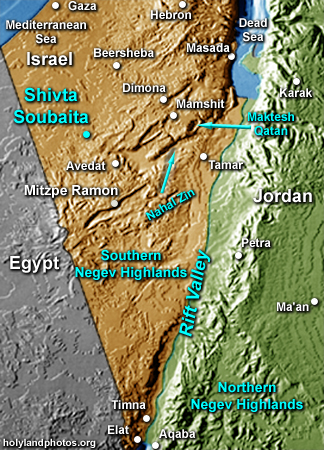 Shivta (Sobata/Soubeita) is a large Byzantine city in the western Negev of Israel that receives only 3.5 inches of rainfall on average.  It is located about 25 miles south-south-west of Beer Sheba.  It was founded by the Nabateans (think Petra in Jordan) in the first century AD but reached its peak during the Byzantine era (ca 4th to 6th centuries).  It seems to have "died out" in the 8th century.

It probably did not function on the ancient "Spice Route," but was primarily a Byzantine agricultural colony and a way station for pilgrims that were headed to Saint Catherine's Monastery at the foot of Mount Sinai (Jebel Musa).