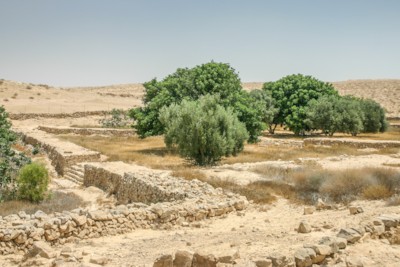 In this section, we present some images of Ancient Farming in the southern regions of Israel.  At the Byzantine Cities of Shivta and Avdat, Israelis have attempted to recreate some of the ancient farms—using dry farming techniques.

The Byzantine Cities flourished at a variety of times, but roughly from the fourth through the sixth centuries—some into the eighth century AD.  It is now estimated that there were about 1,235,000 acres under cultivation!  During that era, there was a strong government in the land that may have helped support these cities and agricultural systems.  It is very possible that during this period there was an increase in precipitation, but this is debated.