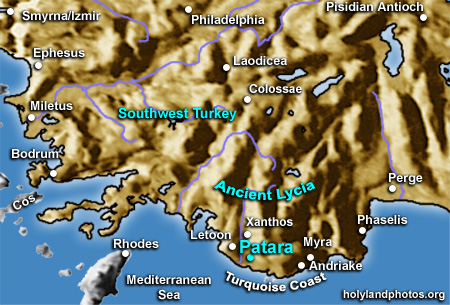 Patara is an ancient Lycian harbor city located on the southwestern coast of ancient Lycia.  In ancient times it is possible that the Xanthus River flowed through it, but today this river flows northwest of the ruins.  Patara was the major port city for Xanthos that was located 6 mi. [10 km.] north, up the Xanthus River.  In ancient times it was believed that the god Apollo spent the winter here—summering on the island of Delos!

The apostle Paul, and Luke (note the “we”), passed through this port as they were heading towards Jerusalem at the end of Paul’s Third Missionary Journey.

Acts 21:1–2  “After we had torn ourselves away from them [from the Ephesian elders at Miletus], we put out to sea and sailed straight to Cos.  The next day we went to Rhodes and from there to Patara.  We found a ship crossing over to Phoenicia, went on board and set sail.”

To view the recently discovered "oldest lighthouse in the world" Click Here. 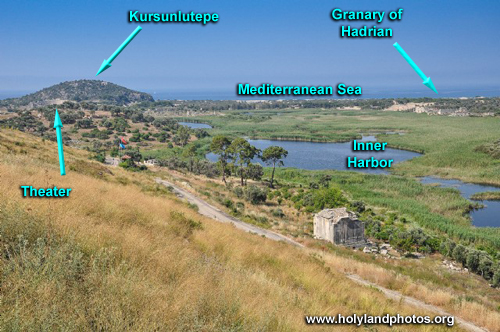