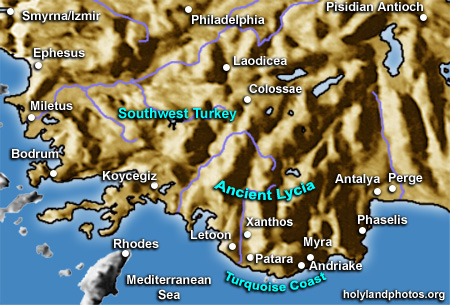 The area of ancient “Lycia” stretches from Koycegiz in the west to Antalya on the east.  This area consists of a rugged Mediterranean coastline with numerous bays and inlets.  This coast is sometimes called the “Turquoise Coast” due to the beauty of the water and scenery.  The main inland mountains are Akdag and Bey Daglari both of which rise to over [3,000 m.] in elevation.  In many areas the steep slopes drop right into the Mediterranean Sea.

The Lycian people are an indigenous pre–Hittite group that go back at least to the second millennium B.C.  Those living along the coast were of course seafaring—at times merchants and at time pirates.  The Lycians were controlled by a variety of powers throughout their history: the Persians, Greeks (Delian League), Ptolemies (from Egypt), and the Romans.  At various times from 200 B.C. to about A.D. 200 they had some autonomy in their “Lycian Federation”—a group of cities that met in assembly.

Today this area is famous because of the well–preserved Lycian cities and tombs.