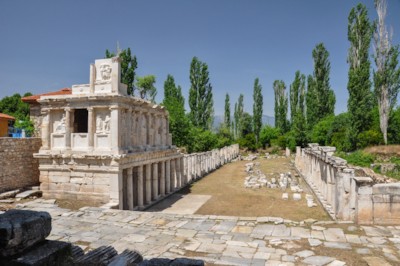 The Sebasteion was a complex of structures that served as a municipal imperial cult sanctuary.  It was dedicated to Aphrodite, the main deity of Aphrodisias, and to the "gods Sebastoi"—that is to the "August Ones," namely Julius Caesar and his successors.  Local elite persons built it to solidify their ties with Rome.  Its construction began during the reign of Tiberius and continued into the reign of Nero.

It was composed of five elements: a narrow rectangular paved courtyard, two, three-story, portico-like buildings—one on each of the long sides of the courtyard, a monumental entranceway (propylon) on the east, and a temple dedicated to Nike, the goddess of victory, on the west.

For a useful description of the Sebasteion see Friesen, Steven J. Imperial Cults and the Apocalypse of John: Reading Revelation in the Ruins. Oxford: Oxford University Press, 2001.