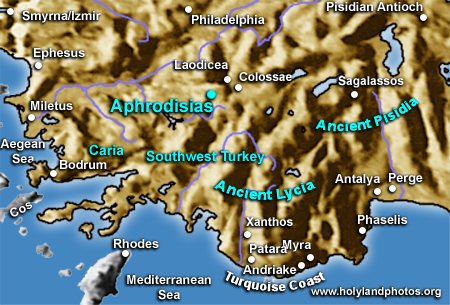 The Theater at Aphrodisias was originally built by Ioulos Zoilos, a slave that was freed by Octavian who became a benefactor of the city— in the first century BC.  An inscription on the stage wall describes this.  Around 1960, the "modern" village of Geyre, which was built on top of the theater and acropolis, was moved to a different location and the excavation of some 120 ft. of debris was removed to reveal the theater.

I have included statues that were found in the theater but are now in the museum at Aphrodisias.

The Stadium at Aphrodisias was built in the first century AD to house traditional Greek athletic contests: foot races, long-jumping, wrestling, discus, and javelin throwing.  Around AD 400 the east end of the stadium was turned into an area specifically designed for Roman animal and gladiatorial fights.