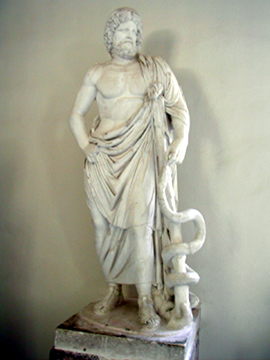 The Asclepion, the healing center of Pergamum, was world famous – named after the healing god Asclepius.  It is located below the acropolis of Pergamum.

During the Roman period emperors such as Hadrian, Marcus Aurelius, and Caracalla visited it.  During that time it was one of the most famous in the Roman world.  The ancient physician Claudius Galen (A.D. 131–201) was born in Pergamum and worked here as well as in Rome.  An expert in anatomy, he studied the nervous system and the heart.  Eighty of his original 500 treaties are still found in medical libraries worldwide.

Also, compare the objects found at the Asclepion at Corinth (Greece) that were dedicated to the god Asclepius.