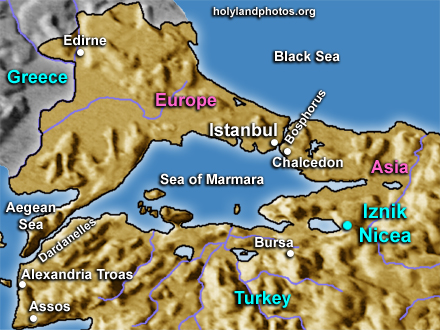 Nicea (modern Iznik) is located 60 mi. (95 km.) southeast of Istanbul on the east of Lake Ascania (İznik Gölü).    The city was founded in 315 B.C. and was "refounded" by Lysimachus who named it after his wife, Nicea.  It eventually came under the control of Bithynia but the Roman Governor of that province was based in Nicomedia.  Soon after 29 B.C. Nicea was granted the honor of building a temple to the deified Julius Caesar and Roma.

Paul probably was attempting to go to Nicea (Bithynia) during his second journey but was forbidden to do so by the "Spirit of Jesus" (Acts 16:7).

The Seventh, and last, Ecumenical Council was held here in A.D. 787 in the Hagia Sophia Church.  This was the council that declared that the veneration of icons was legitimate and to be encouraged.

The ancient city is contained within the city walls that were built in the later first century A.D. and later rebuilt after the Goth invasion in A.D. 268.  These walls form the shape of a pentagon with its base to the south and its apex to the north.