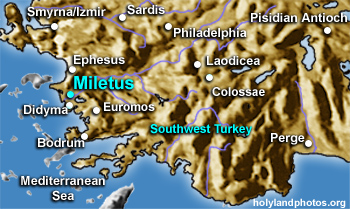 Miletus, modern Balat, was visited by Paul at the end of his third missionary journey – about A.D. 57 (Acts 20:38).  From here he summoned the elders from the church at Ephesus, 28 mi. [45 km.] distant (as the crow flies), and after speaking to them – this is the major speech recorded on his third journey – they had a tearful parting as Paul headed for Jerusalem where he would be taken prisoner.  Miletus is also mentioned in 2 Timothy 4:20.

Miletus was a very important city in its own right.  In ancient times it was situated on a peninsula.  It does not seem that it was a terminus for a trade route from the east as were Smyrna and Ephesus, but it was more of a seafaring city/center which established trading colonies (Pliny says 90) throughout the Mediterranean and Black Sea regions.  Because of its contacts with the Phoenicians at the eastern end of the Mediterranean, Miletus may have been the mediator that brought the Phoenician alphabet into the Aegean region – and this in turn became the Greek alphabet!

In addition many early philosophers were from Miletus: Thales (640-546 B.C.), Anaximander (610-546), and Hecataeus (540-480) as was the great urban planner Hippodamus (fifth century B.C.) – and the list goes on.   Miletus was fought over by the Persians and the Greeks in the fifth and fourth centuries B.C.

Eventually the four harbors of Miletus silted up and today the site, instead of being seaside, is located 6 mi. [10 km.] inland from the Aegean Sea.  The village of Balat moved from the site in A.D. 1955 after a big earthquake.  The Germans have been excavating the site for over 100 years and some of its structures have been reconstructed in the Pergamum Museum in Berlin.

Please note the important inscription mentioning the Jews of Melitus.