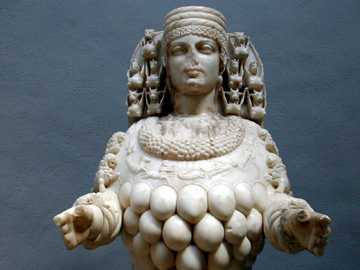 This section contains a selection of artifacts that were found at Ephesus.

Ephesus was the major city of Asia Minor during the New Testament era. It was a major port – now silted up – located at the end of the spice and silk roads that ran west from Arabia and Asia.

Paul visited the city on his second and third missionary journeys – staying there for about 3 years on his third journey. Ephesus is one of the seven churches mentioned in the book of Revelation (1:11; 2:1–7). It is mentioned 18 times in the New Testament.

It was the center for the worship of Artemis (Roman Diana). The Austrians have been excavating there for over 100 years!

Most of these artifacts are housed in the museum in nearby Seljuk.

To view an Ephesus coin at the museum in Pergamum (Bergama) Click Here.

Click Here to go to view the site of Ephesus.