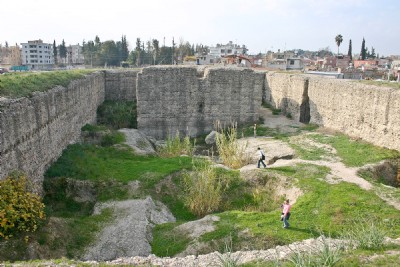 The Donuktash (Turkish for “frozen stones”) is a very mysterious structure that is located on the back streets of Tarsus.  This massive structure is apparently the foundation of a large, second century A.D., Roman Temple.   The exterior core of the temple remains, as do some significant interior foundations—for the marble and stone facing have been stripped away during the centuries.

The Donuktash may have been an Imperial Temple dedicated to the Roman Emperor Commodus (A.D. 177–192).

For more on the city of Tarsus Click Here.