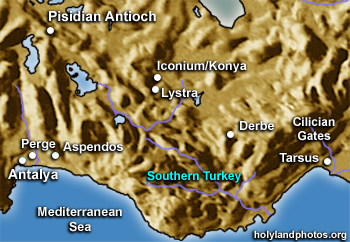 The region called the Mediterranean Coast in this web site includes the area of Turkey's southern coast stretching from Antalya (Attalia) on the west to Antakya (Antioch) in the east. The basic outline of the coast — not making allowances for every bay (and there are many) along the way — is over 420 mi. [670 km.] long. The Plain of Pamphylia is on its western end, the Taurus mountains in the central portion — coming right down to the shore of the sea, and the plain of Cilicia is located on its east end.

At this point it is anticipated that at least the following sites will eventually be included: Termessos, Antalya, Perge, Aspendos, Tarsus, the Cilician Gates, and Antioch on the Orontes.