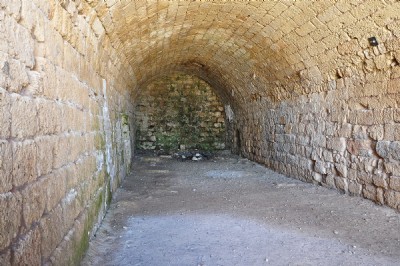 Just beyond the north end of the early (Herodian) hippodrome/circus there are a series of long vaulted storage halls.  One of these was later turned into a religious center for the worship of the god Mithras—a "mithraeum."

This deity was, possibly from Persia, was popular among members of the Roman Legions.  He was evidently the protector of both soldiers and merchants.  Being a "mystery" religion, mithraic beliefs and rites are not well known, but the iconography indicates that one of the rites evidently included the slaying of a bull and the manipulation of (the life giving?) blood of the bull.

A variety of dates have been suggested for the construction and use of this structure, some dating its initial use to the late first century AD, others date its beginning to a later period.  Apparently it went out of use in the fourth century AD—in the Byzantine Period.

For a popular and a scholarly presentation of the Mithraeum, by its excavator, Robert J. Bull please see: