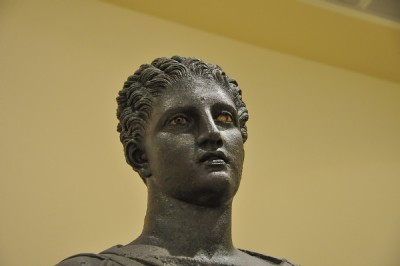 The city of Piraeus is the main modern port of Athens.  The seldomed-visited Archaeological Museum of Piraeus was inaugurated in 1981.  It houses artifacts mainly from the area of Piraeus including 4 rare, outstanding, bronze statues.  Ancient bronze statues are very rare because they were often melted down and the metal was recycled for industrial and/or military purposes.

Four large bronze statues were found in 1959 during building excavations in Piraeus.  They were found as a group and although deposited at the same time, they were crafted at different periods.  They were probably deposited in the first century B.C.