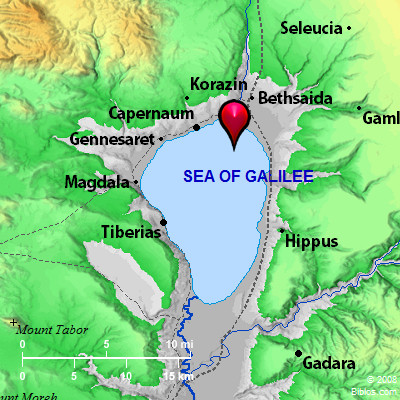 The site of al–Majdal (Arabic for "tower") is located 4 mi. northwest of Tiberias, along the western shore of the Sea of Galilee.  This is evidently the site of New Testament Magdala (from migdol "tower") which is the same as Taricheae ("the place of salted fish") mentioned by Josephus where a bloody naval battle took place between the Jews and Romans during the first Jewish Revolt (ca. A.D. 66–70; War 3.10.1–10 [462–542]).

It was evidently the home of Mary Magdalene, one of the followers of Jesus who is mentioned 12 times in the NT.  It actually may also be the site of "Magadan: (Matt 15:39) and/or "Dalmanutha" (Mark 8:10).

The site was excavated in the 1970's and more recent (ongoing) excavations have found the remains of an early Jewish Synagogue dated to the first century A.D. as well as ritual baths, streets, houses, and even the wharf.

If the dating of this structure is correct, and it is in fact a synagogue, then it is very possible that persons mentioned in the Gospels worshiped here from time to time.

For a recent article see in the Israeli newspaper Haaretz.