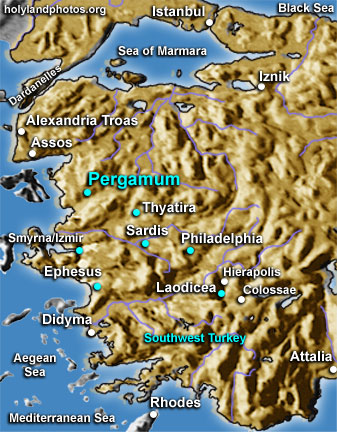 Ancient Pergamum (modern Bergama) is located in western Turkey 16.5 mi. [26.5 km.] inland (as the crow flies) from the Aegean Sea. It was founded as a major city in the third century B.C. and served as the capital of the Attalid Empire until 133 B.C. At that time Attalus III bequeathed his kingdom to the Romans and in 129 B.C. this kingdom formed the core of the newly–created Roman province of Asia — with, initially at least, Pergamum as its capital.

This was a huge city with an acropolis and a lower city. A temple dedicated to the cult of the emperor was first established here in 29 B.C. Emperor worship was a major stumbling block for the early Christian Church.

It is the third city mentioned in the book of Revelation (1:1; 2:12–17) and the reference to the "throne of Satan" (2:13) has variously been interpreted as emperor worship (note the Temple of Trajan), the altar of Zeus, or the worship of a plethora of deities at Pergamum (temples to the emperor, Zeus, Athena, Dionysus, Asclepius, Serapis, Demeter, etc. have been found).

For various aspects of the city visit the Asclepion and the Artifacts in the Pergamum Museum.